Overcoming Overwhelm: The Secrets Of A Lion Tamer 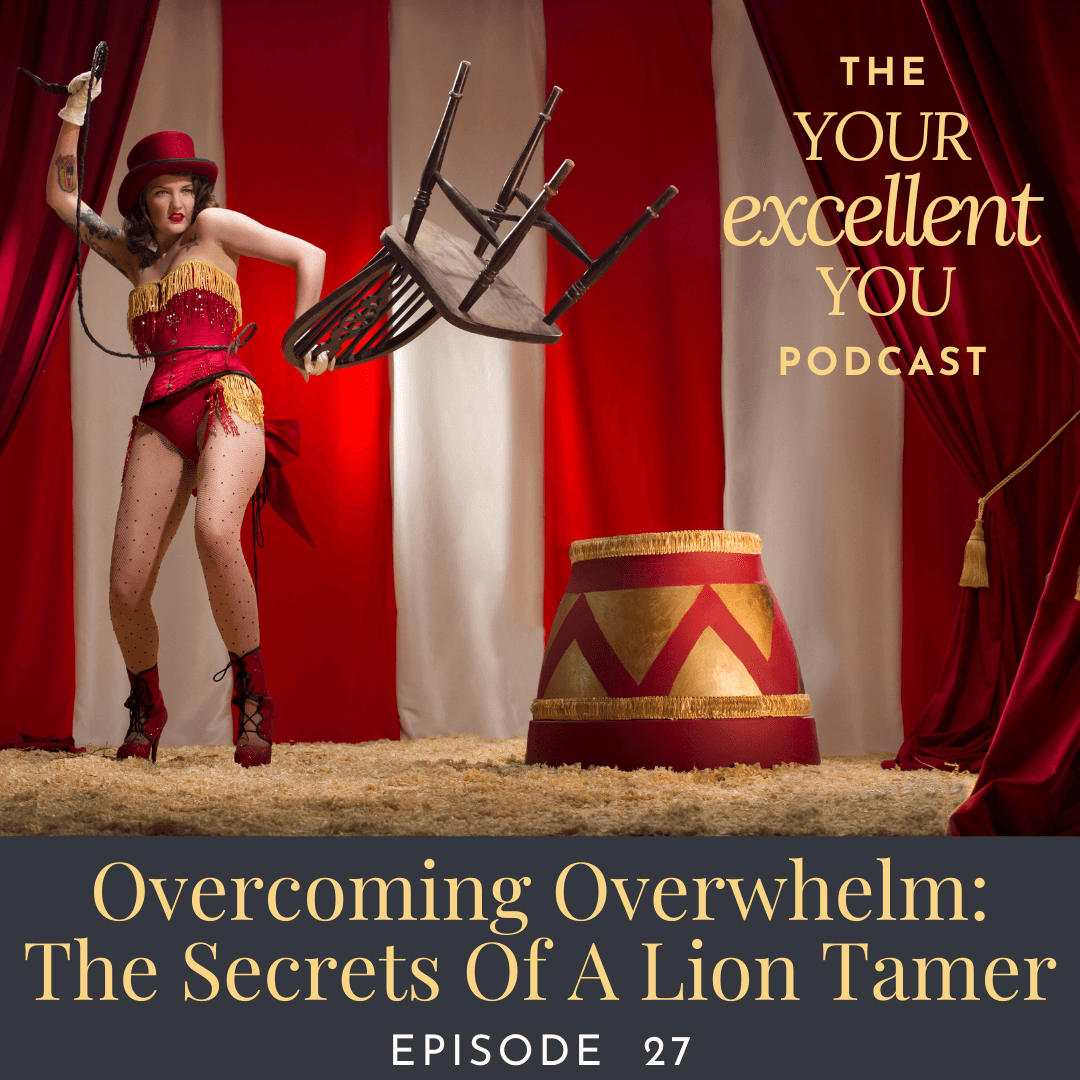 Last week, I received a message from an entrepreneur who I am working with so she can stay on track as she launches. I’ve been working with her for 3 weeks and she has 3 weeks left before her launch. She had reached the point in her launch plan, where she had to do some research, accomplish a handful of tasks, and make a couple of important decisions. All in all, she was probably looking at about 2 to 4 hours of work.

I had sent her a message to ask how she was doing and her simple reply was, “I’m so overwhelmed right now.”

Today, I want to share with you what I told her. It’s the same thing I tell myself when I start to feel overwhelmed in any area of my life, including my business.

In those moments, when overwhelm is taking over, I remind myself about the secrets of the Lion Tamer.

When I was in the 3rd grade, my Dad bought tickets to the Ringling Brothers Barnum & Bailey Circus. Everything about the experience felt really magical. There was so much going on, it was hard to really see everything that was happening. There was music, and lights, elephants, acrobats, Clowns, and even a tightrope walker.

There is one point in the show where everything gets quiet and the lights go down. In the center of the ring a spotlight focuses on a lion pacing inside a large cage. A man steps out of the darkness and stands next to the cage. In his hands he’s holding two things: a small stool and a whip. A pretty woman opens the door and the lion tamer enters the cage with the lion. The assistant quickly shuts the door and now it’s just the man and the lion alone in the cage.

At the time, that liontamer seemed like the bravest person in the world. When he left the cage, alive and unhurt, I thought he was the coolest person on the planet.

There’s something the liontamer knows that the rest of us don’t know.

What the audience sees, in that moment, is a man or woman willing to risk their life by going into a cage to be alone with a deadly lion. What the audience doesn’t know is that inside that cage, lion tamers leverage the psychology of overwhelm to their advantage.

So, let me explain.

A Lion Tamer always brings 2 items with them into the cage: a stool and a whip. To the audience, this seems insane. Neither is going to stop the lion from devouring him or her.

Yet, every time a lion tamer enters the cage, the same series of events happens.

When the lion notices there was a tasty human in the cage, the lion tamer holds up the stool, with the legs pointing towards the lion.

Once the stool is raised, the lion stops and stands still. Then, on occasion, the lion tamer would crack the whip. Still, the lion stays put. Why in the world would a predator with easy prey deny it’s natural instincts and not attack?

The simple answer is that the lion is overwhelmed.

The lion is overwhelmed by the stool.

Why does that happen?

See, when the Lion Tamer holds up the stool, they point the seat towards themselves and the legs towards the lion. The lion, seeing the individual legs, is overwhelmed by the presence of 3 separate end points. It tries to focus on all 3 at once but it can’t. Instead, it’s brain jumps from focusing on one leg, then another, then another, and on and on.

The lion’s brain overrides it’s natural instinct to eat the tasty human because it keeps trying to focus on all of the stool legs at the same time.

When the lion clues in and starts to focus on only one leg, that’s when it realizes that lunch is standing 10 feet in front of them. At that point, the lion tamer cracks the whip to distract the lion. After the momentary distraction, the lion begins the whole focusing process again.

Despite the lion’s innate desire to eat the human standing in the cage with them, it never does….because it’s overwhelmed.

What’s true for the lion is true for us. When we try to focus on too many things at the same time, our brain gets overwhelmed. We freeze. We become unproductive. Everything seems hard.

The truth is, if we can train our mind to focus on one thing at a time, the overwhelm goes away.

That’s all it takes. One focus, one task, consistent and persistent action until completion.

If you’re feeling overwhelmed right now, take a moment to assess each task that needs to be completed. Pick one thing and get started on it. Work on it exclusively until you reach a stopping point. Then move to the next thing and focus on it. Continue doing this until you’ve completed everything you want to accomplish.

Over the years of running my own business, I’ve turned to the Lion Tamer’s secret to help keep me out of overwhelm and on track to reaching my goals. I hope it helps you too.

WHAT PEOPLE ARE SAYING...

Danielle's message is spot on with achieving goals. Not only does she practice what she preaches, but she's your guide to help YOU achieve the best version of yourself! A must listen!

Grow a biz & feel good! Danielle is really skilled at bringing both the actionable steps plus the mindset work so we can feel good as we grow our businesses while being present for our families. I look forward to listening every week!

MEANWHILE, ON THE SOCIALS